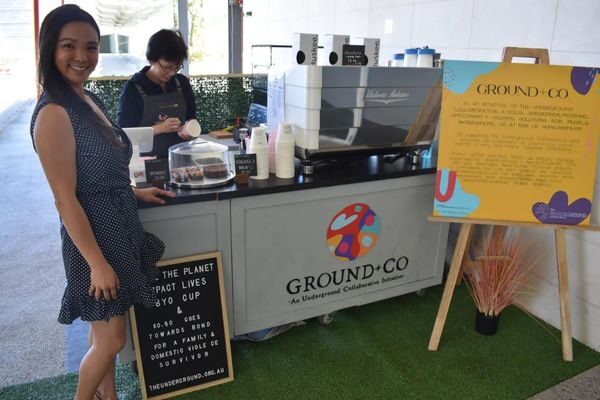 When Chloe* moved to Australia she never expected to end up fearing for her life, depressed and homeless.

Even less expected was the fact her saviour would be a little coffee cart in Perth’s CBD, giving people who are homeless or at-risk of becoming homeless employment and a sense of purpose and belonging. After being subjected to years of mental, emotional and physical abuse from her former partner who she moved to Perth for, Chloe was given a lifeline through The Underground Collaborative’s Ground+Co Cafe.

“My first two years here, he didn’t abuse me,” she said. “He later became very abusive, was drinking two litres of port each night, and would yell and scream at me. I feared what he would do but I had nowhere to go.

I had no friends and no money because he wouldn’t allow me to work or leave the house. He was controlling, oppressive and I became more of a servant to him. I faced a lot of mental, psychological and physical abuse, and felt I couldn’t leave.”

In the middle of the night, with just $30 to her name, Chloe found safety for a couple of nights with the only friend she had before seeking assistance through Uniting Care and Zonta House Refuge.

“Two nights before I got to the refuge, I was trembling, had panic attacks and I couldn’t sleep or eat,” she said. “I had no hope and it took a lot of psychological treatment to get to the point where I felt I had hope for my future.” After three months living at Zonta House, Chloe got a place of her own and gained employment at Ground+Co where she found purpose and further support.

“I now have a life to move forward with, I have some money to pamper myself with food and clothing and somewhere to live,” she said. “I’m much happier now and realise how strong I actually am and have hope of becoming an Australian citizen.”

For the full article, head here.

The Underground Collaborative acknowledges the Australian Aboriginal and Torres Strait Islander peoples as the first inhabitants of the nation and the traditional custodians of the lands where we live, learn and work. We pay our respects to ancestors and Elders, past and present and are committed to a positive future for the Aboriginal community.